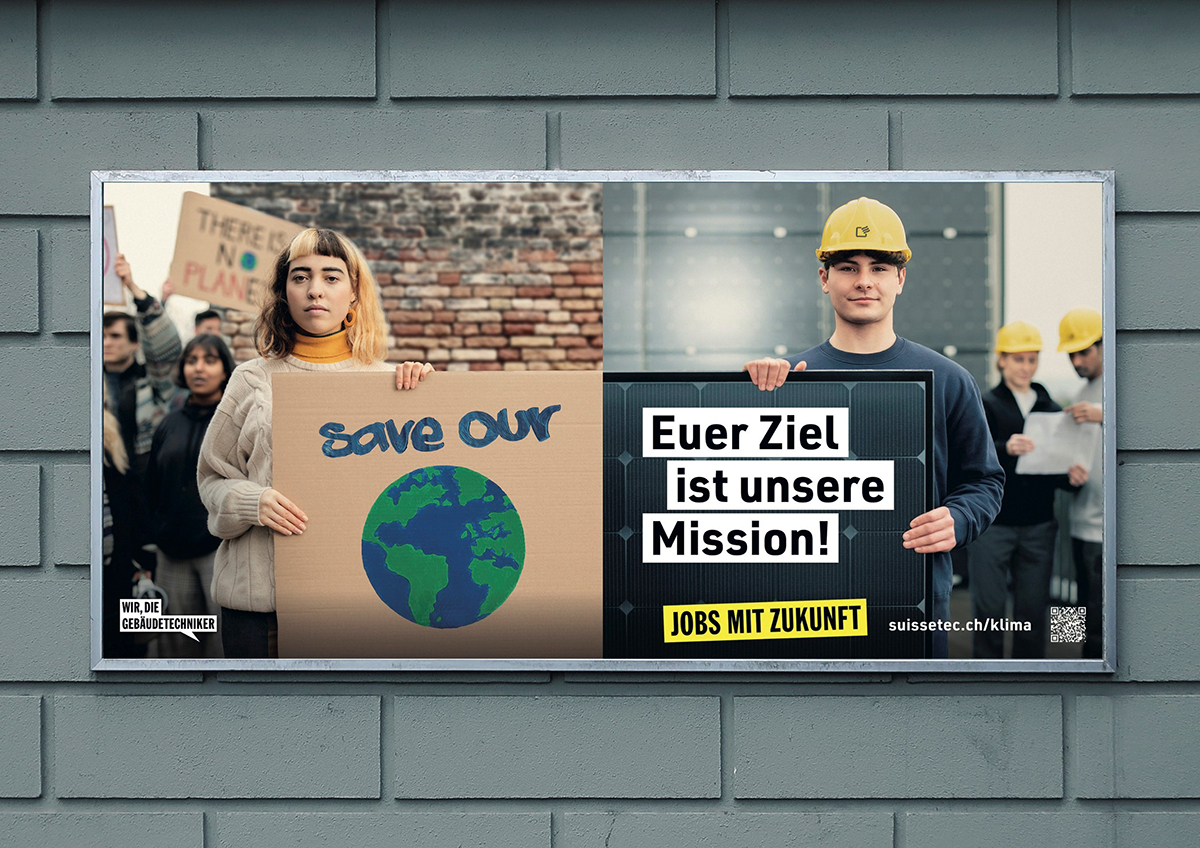 The claim "Climate protection - your goal is our mission" is intended to show the connection between the world of young climate activists and building technology - despite the high contrast. As early as 2008, when significantly fewer people were concerned with the topic of climate, Suissetec launched one of the first CO2 consulting tools. The association is clearly committed to the Energy Strategy 2050 and advocates the CO2 law with conviction.

Best of both worlds

To clearly separate the world of the demonstrating climate activists and that of the building technicians on the one hand, but on the other hand to create a connection between the two, was the big challenge for Jim & Jim in the development of the campaign. A connecting element had to be integrated that would make it clear that the goals of the two worlds, which are so different, are ultimately the same.

The so-called "signature moves" implement this: Two main characters are portrayed in their professional and political environments, respectively, and perform activities typical of their everyday lives. During the execution, both make the same movements. Both situations have an identical framing and are shown in the video with flowing transitions. Thus, it stands out not only how different the two worlds are from each other, but also that there are similarities between the building technicians and the climate movement. The moving image was produced in various formats and lengths. The short and long versions are ten and 30 seconds long respectively.

Various social media platforms such as Facebook, Instagram, TikTok, YouTube and Snapchat as well as online advertising spaces are used to broadcast the long version of the video. Jim & Jim also defined several customer journeys to reach the different target groups. On the one hand, young people who are on the threshold of their next educational step were addressed. Secondly, so-called influencers were addressed - those who can influence young people and accompany them on their life and education path. This targeting also includes already trained building technology professionals, whose professional pride is to be increased by the campaign.

In a second wave, the short version will be shown on numerous DOOH screens in Switzerland. In parallel, a national OOH campaign is part of the project, which can be seen in all major cities in German-speaking and French-speaking Switzerland. The second wave is also supported with a static display and moving images of the campaign to generate more reach. In addition, there will be social content produced in line with the campaign and published via the Instagram channel "Wir, die Gebäudetechniker". The campaign will be broadcast throughout Switzerland in spring 2021.