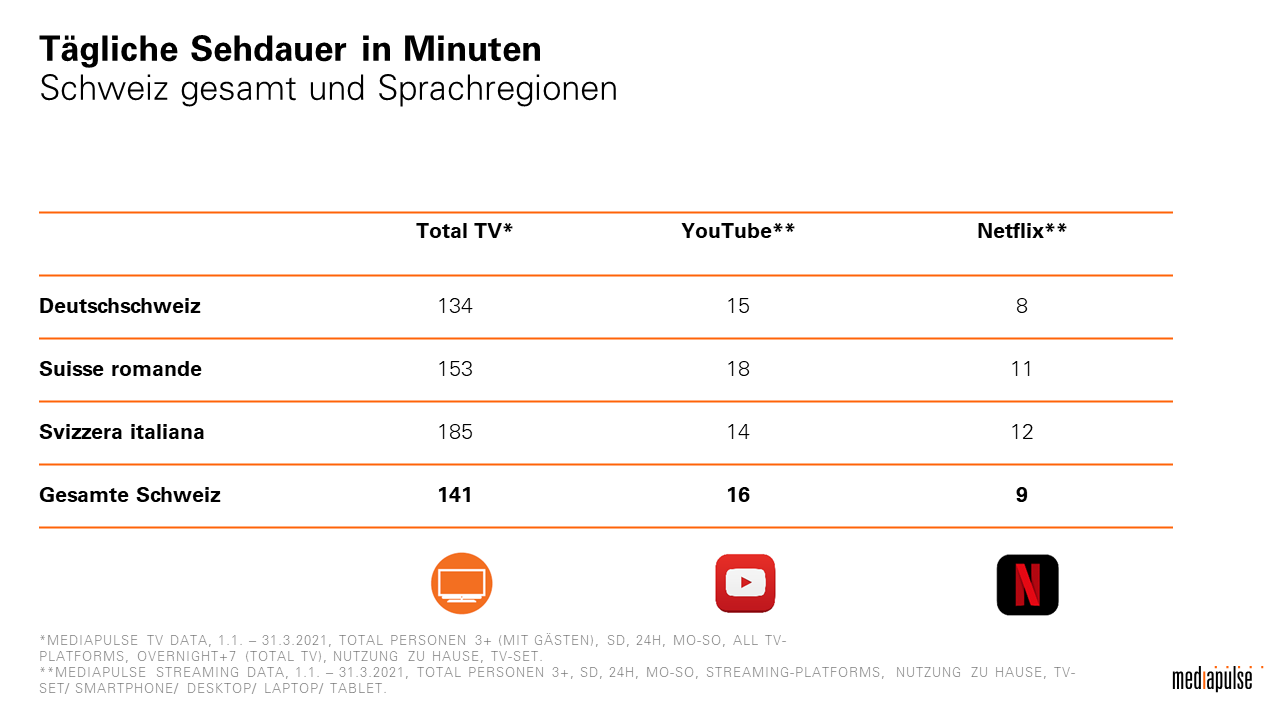 With the further development of its TV measurement system, Mediapulse is pursuing the general goal of providing the Swiss TV market with an independent, cross-platform and comparable database with which the use of TV and other moving image offerings can be uniformly quantified and continuously monitored.

In a first expansion stage, the cross-device use of the most important international platforms can be recorded on the basis of the existing TV panel from the beginning of 2021: the streaming providers Netflix, Disney+, Amazon Prime and Apple TV+ as well as the video platform YouTube. In a second expansion stage, this list will be extended to include domestic web TV platforms from the second quarter of 2021. 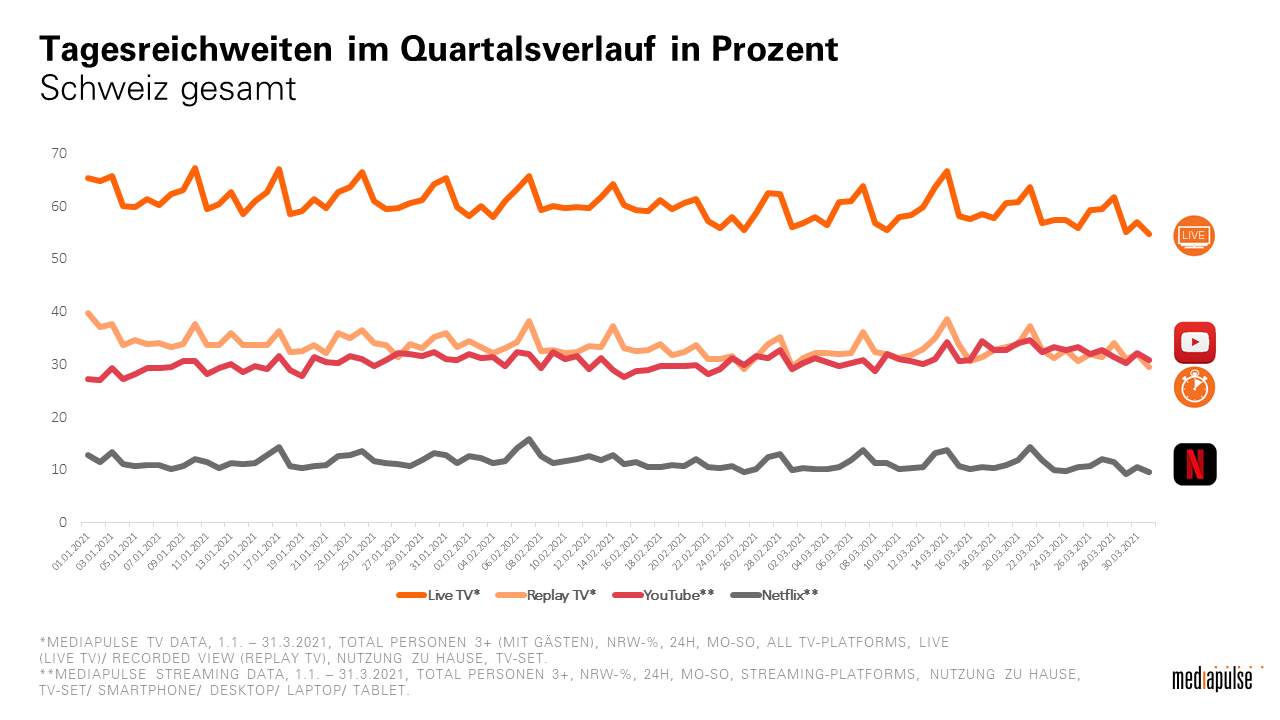 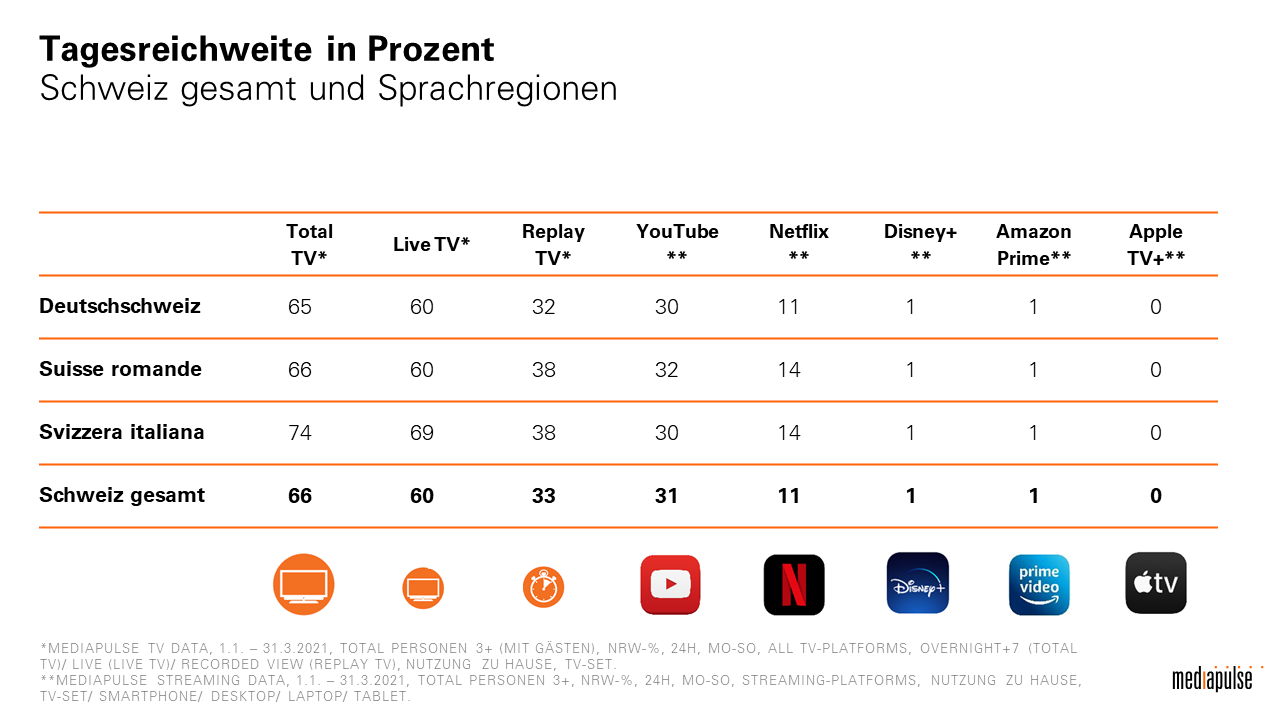 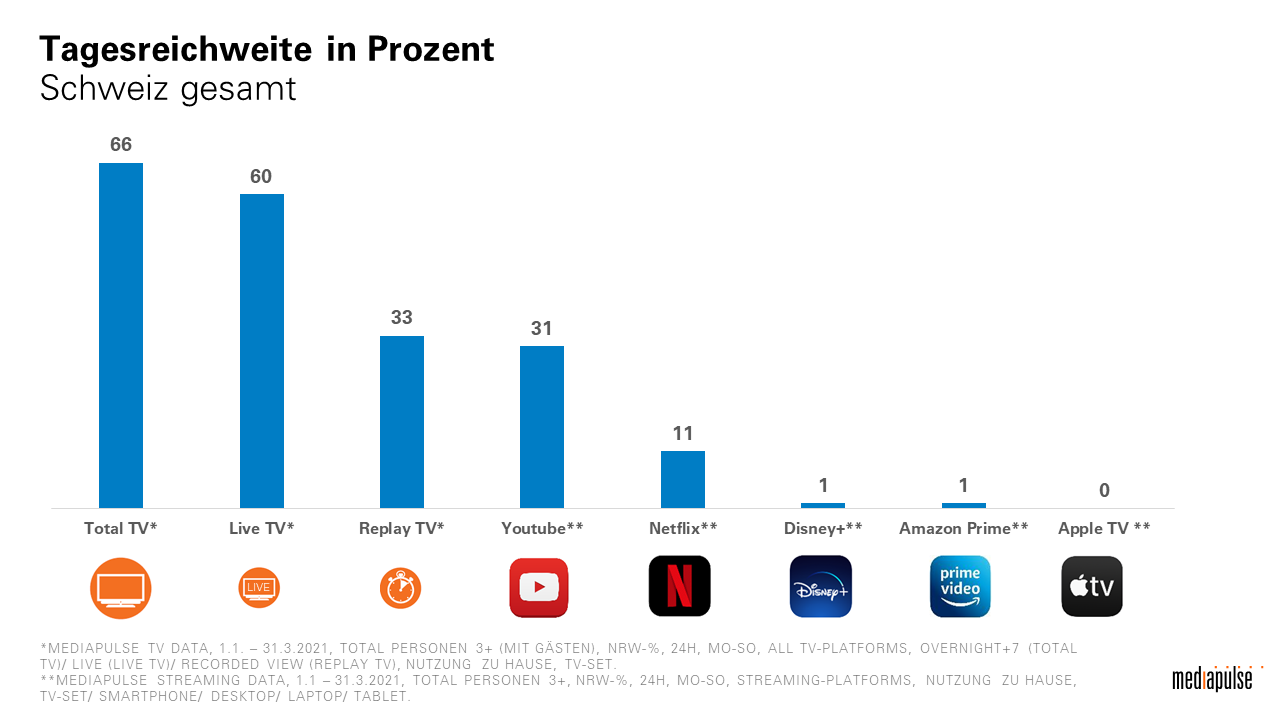 The figures presented by Mediapulse for the first quarter of 2021 show firstly that, among the offerings considered, only YouTube and Netflix have so far established themselves in Swiss households. Secondly, a comparison of these two platforms shows that although YouTube achieves a significantly greater daily reach than Netflix (31 percent vs. 11 percent), it is able to retain its users for less time than the streaming service (51 minutes per day vs. 81 minutes per day).

Notwithstanding these success indicators, the figures from Mediapulse thirdly make it clear that domestic moving image consumption is still dominated by the offerings of the TV broadcasters. If the daily viewing time of TV, YouTube and Netflix is added together, 85 percent of the joint usage budget is attributable to the TV genre. 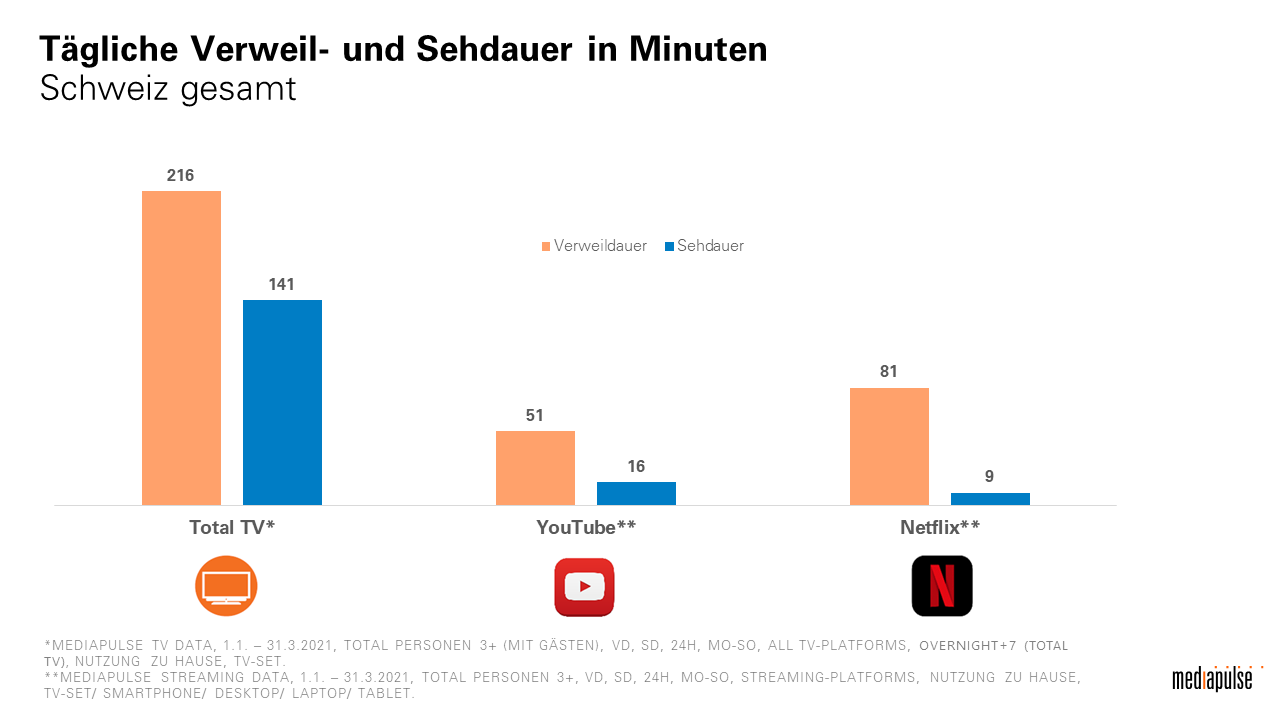 The usage figures for "Mediapulse Streaming Data" were surveyed in 1,870 households with around 4,300 people. Approximately 9,000 online devices (PCs, laptops, tablets, smartphones, connected TVs) were examined via continuous technical measurement based on audio matching (TV offerings) or router meter (streaming/video offerings). TV usage was measured exclusively on conventional TV sets, while the remaining moving image offerings were measured on all screens, i.e. both via the TV set and via PC, laptop, tablet or smartphone. 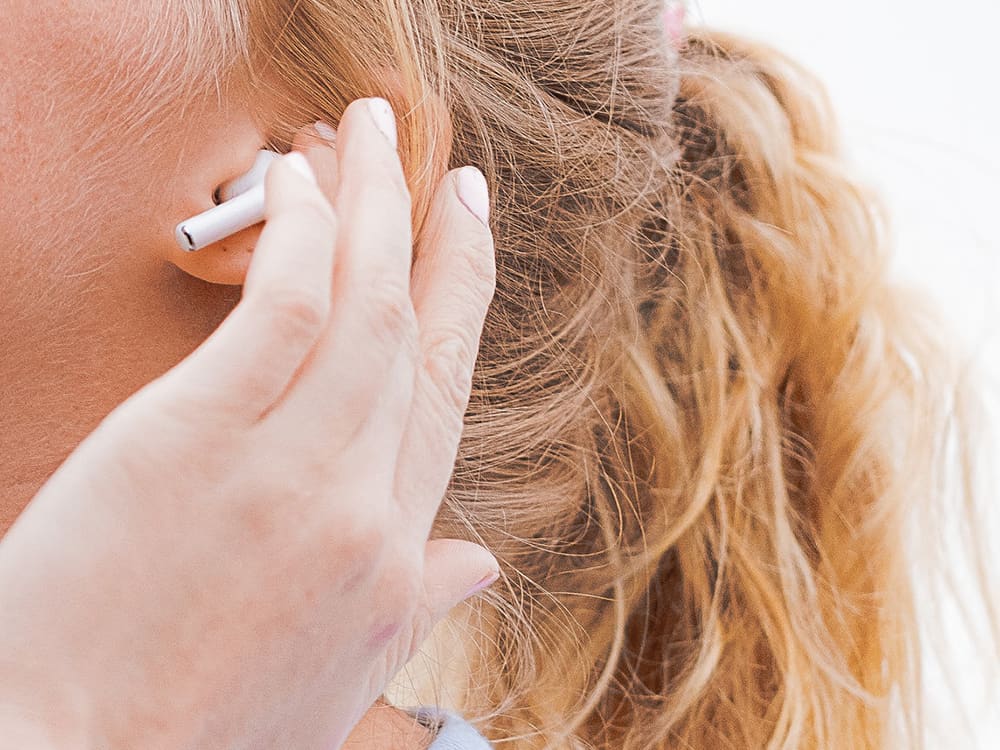 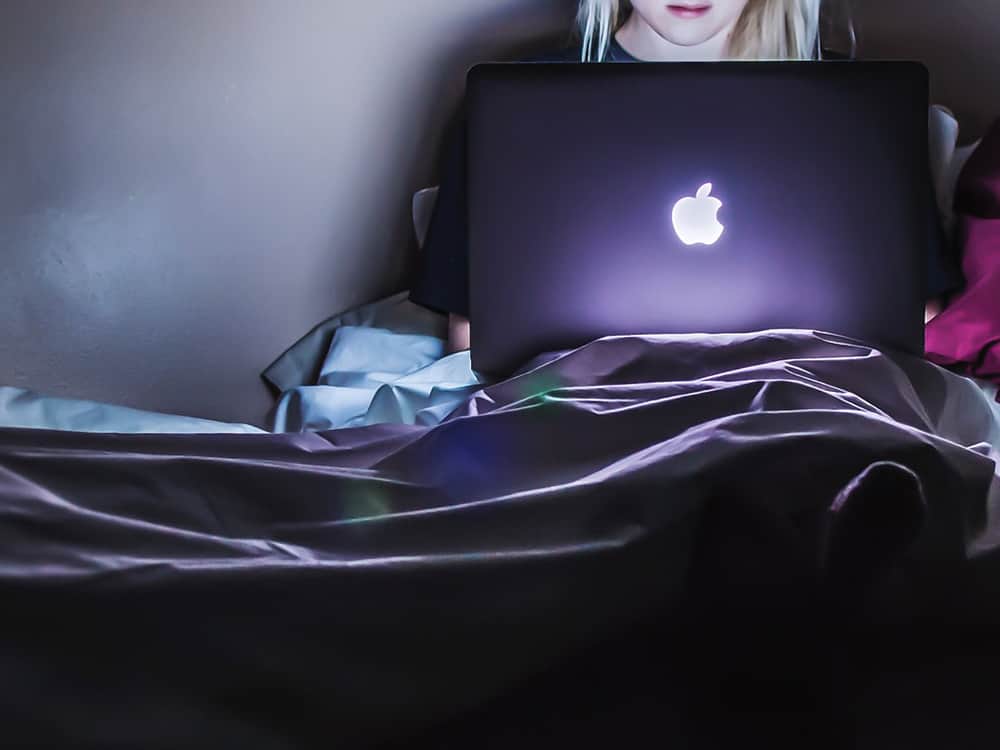 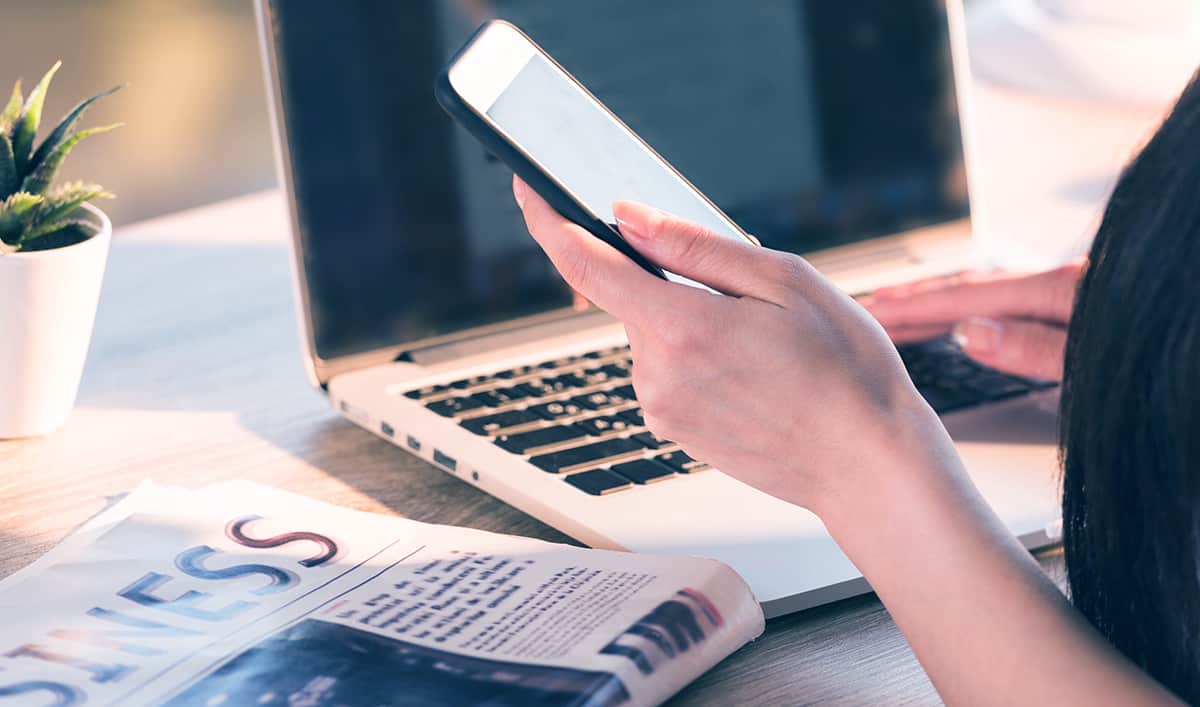