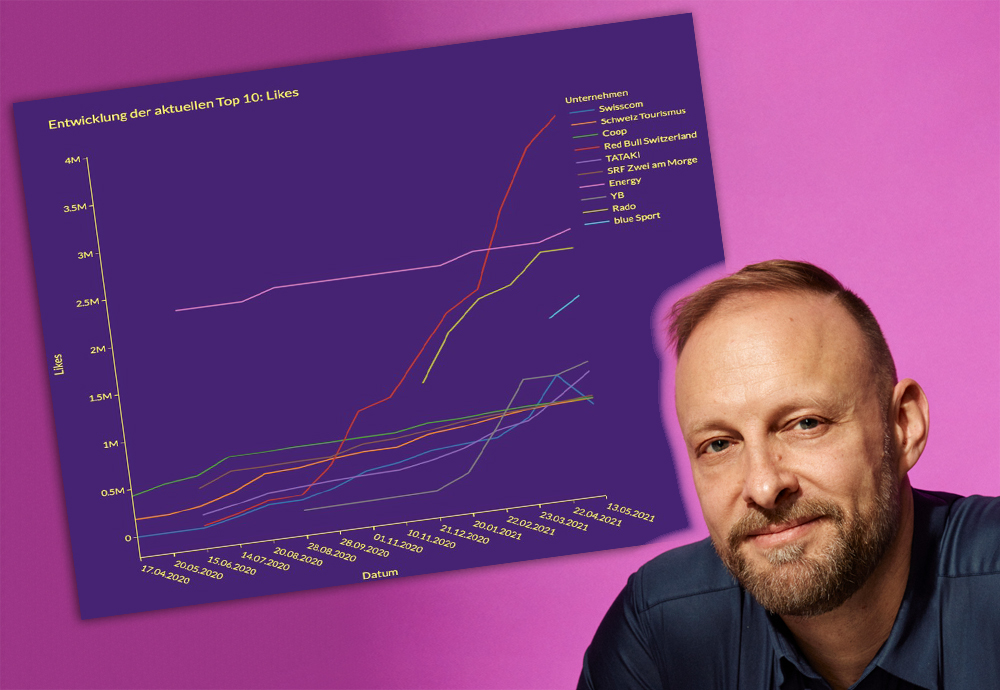 Within a year, TikTok has grown by more than 30 percent in terms of users in Switzerland. Video viewing activity also increased by a staggering 55 percent. Swiss users spend on average far more than an hour per day on TikTok. Successful companies should therefore also grow by at least 30 percent in order to "stay with the people".

Swiss companies have jumped on the bandwagon and successfully

While we discovered 18 Swiss companies on TikTok in April 2020, there were already more than 100 in May 2021. All these brands have published more than 4000 TikToks this year and worked their way up from the original 743,000 likes to more than 24 million. Much of this has already been professionalized: 57 percent of accounts are business accounts - 38 percent are also verified. 41 percent still use private or creator accounts.

The big Like collectors include Red Bull, the watch brand Rado and YB. The three brands also scored in terms of follower growth.

The first does not have to be the most successful

In the ranking, particular attention is paid to the likes per video in order to put individual ricochets into perspective and to rank companies higher that generate exciting content in the long term. Striking, but not surprising: the initial successes are difficult to maintain. 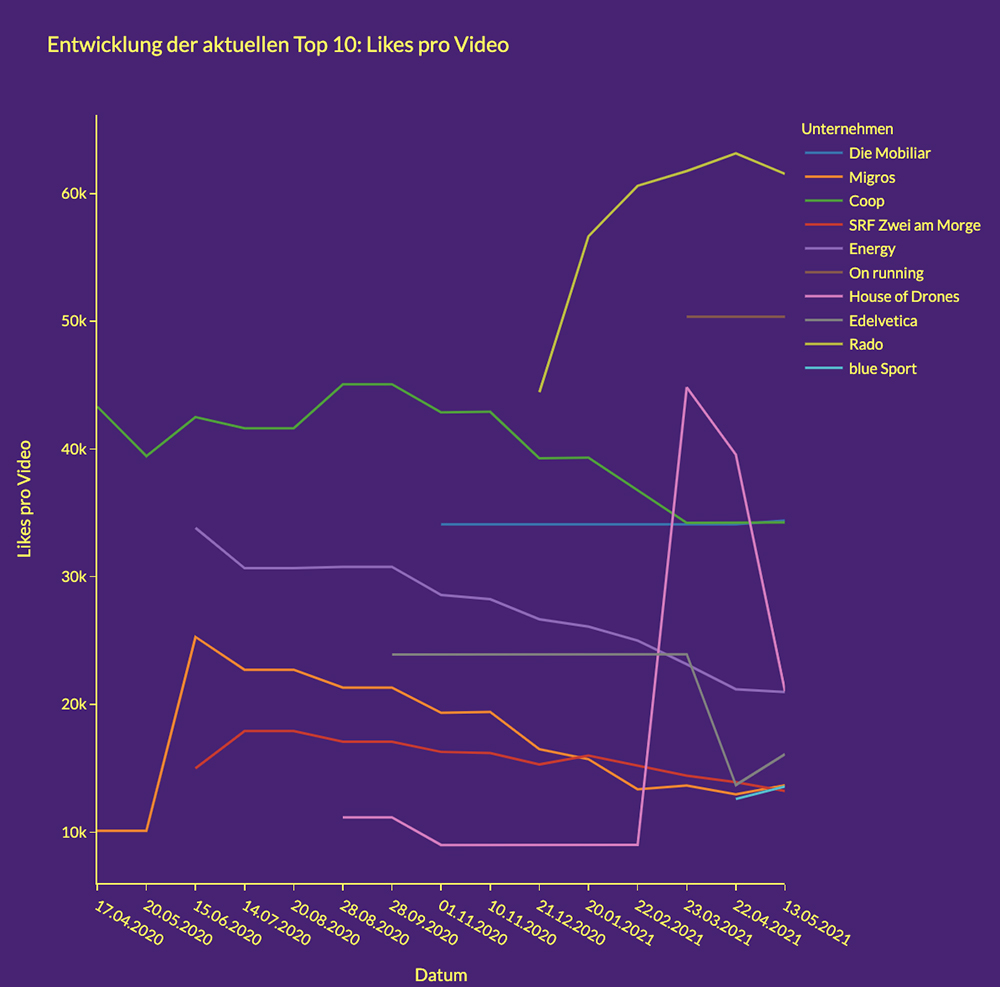 Coop, the winner in the first ranking with around 30,000 followers and 512,800 likes, is still in the top 3 in May 2021 and was able to increase its followers and likes by around 60 percent. Apart from Migros and SBB, however, this is the only brand that has been able to defend its place in the top 20. All other brands have dropped many dozens of places. Being an early bird can therefore be an advantage, but it is no guarantee of a top place. The highest relative growth rates were achieved by SBB, the FOPH and EF Switzerland in terms of followers and likes - in the 4-digit percentage range. In terms of likes, however, only two brands lost ground: Lenzerheide and Swatch. The assumption is that a few videos were deleted.

Companies from the consumer goods sector (21.6%), media (19.6%) and tourism (11.8%) are particularly active on TikTok. Media and formats like Tataki, Zwei am Morge, Energy and actually Red Bull garner the most likes and followers. However, consumer products lead the way in terms of top likes per video. 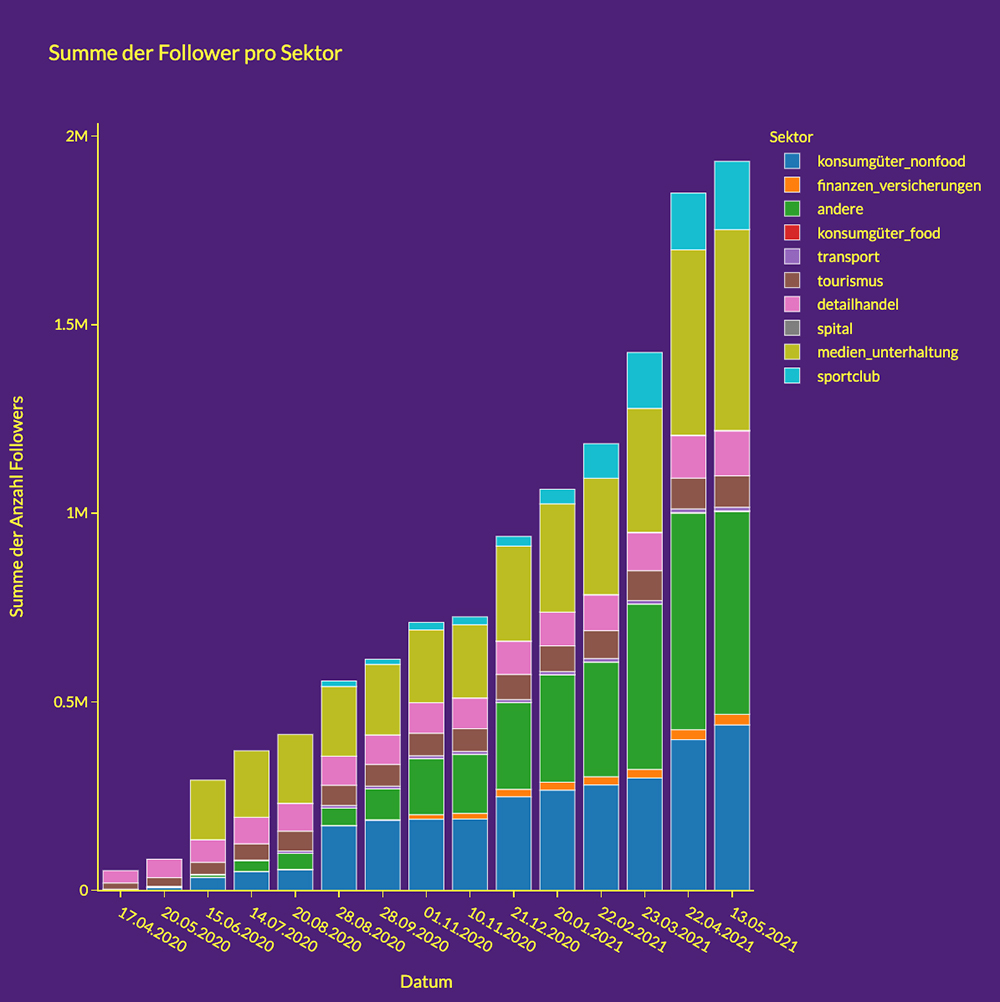 It pays to jump on the TikTok bandwagon early. Now, users are still open to exciting brands. In a year, they'll be more selective.

What influences the range?

The basic principle is well known: TikTok is a viral machine and it doesn't matter how many followers you have to get big reach and land on the foryou page with users.

In the graphs you can see: Rado has the nose in front in the views per video - through boosted/paid TikToks. It's a different story when it comes to shares and comments per video. Blue Sports and Radio Energy always manage to produce viral bangers that are shared frequently.

When analyzing the actual videos, five patterns could be identified.

TikTok is growing rapidly in terms of users, but now also in terms of companies. The quality of the content is high and very creative. No other platform we know of allows small brands to reach so many people organically and virally and to grow quickly if you have found the sweet spot in your content strategy.

TikTok is now a fixed component in the digital media mix for our customers and for new customer briefings. This is certainly also because the majority of TikTok users are over 18 and other segments can also be reached that are not active on Instagram, Snapchat or Facebook. We personally appreciate the safe brand environment - no fake news etc. - and the uncomplicated and direct customer service that TikTok offers in contrast to its competitors.

The price per thousand contacts on TikTok is five to ten times lower compared to other social media platforms. Click prices and engagement rates including paid follower growth are also impressive. Prices have remained very stable so far and have not increased noticeably. Campaign performance has also remained impressively high over the year as long as the content is right. Nevertheless, TikTok preaches itself: Create TikToks not Ads! Are you in?

* Mike Swede is a digital strategist, entrepreneur, speaker and lecturer at various Swiss universities such as BFH, MAZ, ZHAW ML & ZHAW AL and the University of Basel. He is co-founder of Goldbach Interactive (exit), the content marketing software Cooala and Powdience - Data Driven Personas.

In April 2020, Schwede launched the first Swiss TikTok ranking. The current TikTok Ranking Swiss Companies is located on each Mike.schwede.ch/tiktokranking and is published regularly on Werbewoche.ch. 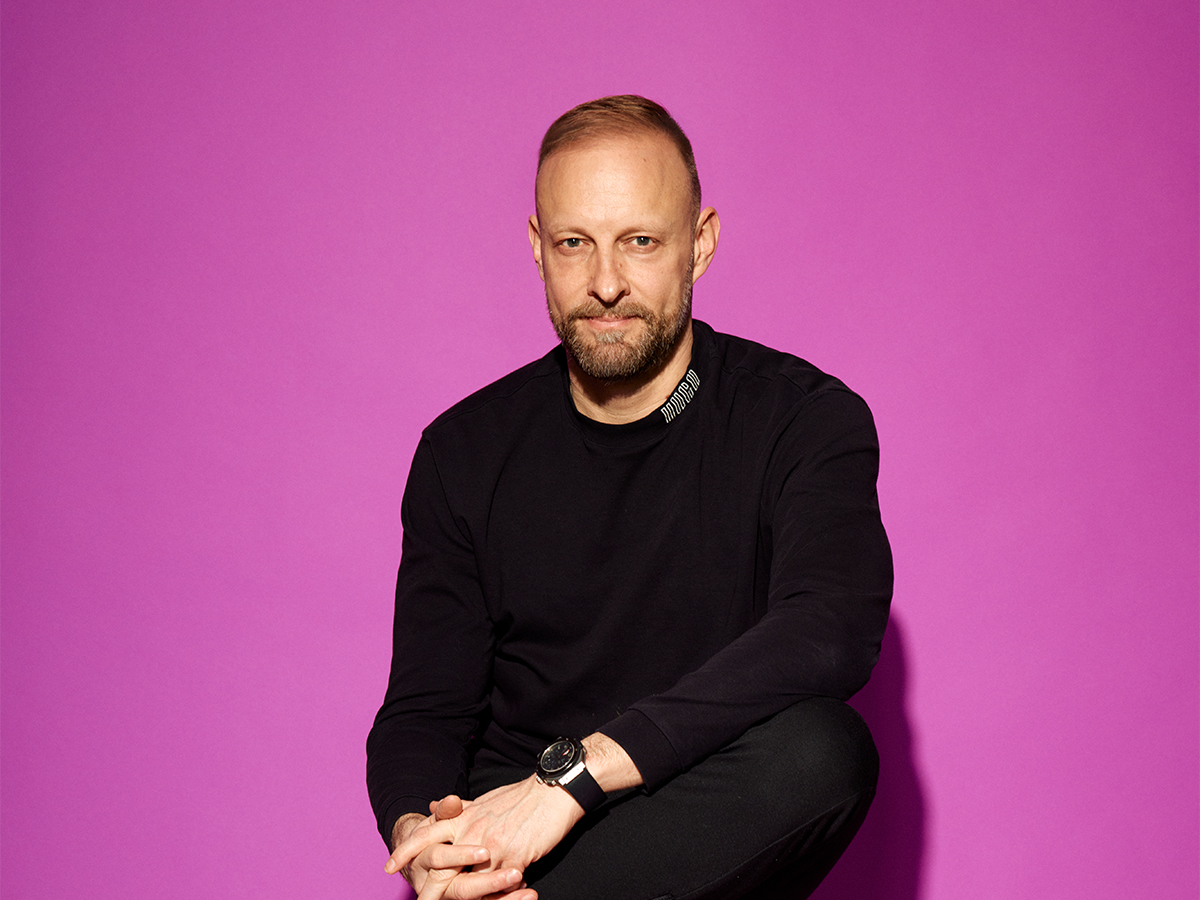